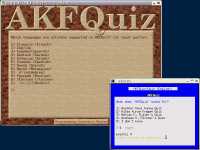 click to enlarge
AKFQuiz is no longer actively developed. It is in maintenance mode. A new version is in preparation for using newer technologies, but no new features. You can still contact the author for questions or support requests.

The package AKFQuiz lets you easily make your own quiz games, learning exercises or psycho-tests. These can be used with grquiz in a graphical environment, with diaquiz as a simple GUI program or with scrquiz on the text-console. There is also a line oriented variant, linequiz, which can be used as a backend.

A CGI-variant, cgiquiz can be installed on a Web server to offer exercises via Internet or a local network. There is also an exam-mode in cgiquiz to use it for serious exams.

There is a variant for the web, named AKFQuizWeb. It is written in Perl, which is supported by more web providers. But it doesn't have the exam-mode. AKFQuizWeb is not licensed under the GPL, but under the AGPL. It is a complete rewrite and does not share any code with AKFQuiz.

Or you can use mkquiz, which generates an HTML file for to use with JavaScript. Those can then be published using any deliberate web-space provider.

At this website you'll find some example online quizzes and you can download the program package AKFQuiz. You can also find the documentation here.

Example files are available on the Example-Files-page.

You can also have a look at the automatic index.

AKFQuiz is Free Software. — Please don't confuse Free Software with Freeware! Freeware just doesn't cost anything, while the source-code is mostly kept secret, so nobody but the original author can see how it works or make changes to the program. And there are often more restrictions. On the other hand, Free Software needn't be free of charge. There is also commercial Free Software. Free Software is free in sense on freedom: Have a look at the License of AKFQuiz.

AKFQuiz is also not Public Domain, but protected by copyright law. While the license allows a lot, it doesn't allow everything. Especially it doesn't allow to impose further restrictions. You may distribute the programs modified or unmodified, for a fee or free of charge — but only under the condition, that you give others the same freedoms that you have. That is why you must distribute it with the corresponding source code. It's worth nothing to say “You have the freedom to see the source code, but I won't give it to you!” — That is restricting the freedom. It's also not enough just to point others to this homepage. I don't keep old versions, so chances are, that you can not get the corresponding source code from this website — and I cannot guarantee, that this website is always reachable.

What kind of system is this?

You can browse the GIT repository of this project with your web browser. This gives you a good picture of the current status of the source files. You may also view the complete histories of any file in the repository as well as differences among two versions.

You can clone the GIT repository by using the following command line:

To update your working copy later, change into the directory “akfquiz” (important) and enter “git pull”.

Executable binaries are available for i386 compatible PCs with the following operating systems:

ReactOS (ReactOS is still very experimental)
tested with ReactOS 0.2.8.
still several problems, but it is useable

Windows (unfree system, commercial)
tested with '95 and 'ME

AKFQuiz
Copyright © 2003-2007 Andreas K. Förster
This program is free software; you can redistribute it and/or modify it under the terms of the GNU General Public License as published by the Free Software Foundation; either version 3 of the License, or (at your option) any later version.

This program is distributed in the hope that it will be useful, but WITHOUT ANY WARRANTY; without even the implied warranty of MERCHANTABILITY or FITNESS FOR A PARTICULAR PURPOSE. See the GNU General Public License for more details.

Please Note: the quiz files in the package are not officially a part of AKFQuiz. They may be licensed differently.

If you have questions, suggestions or other comments you can use the Support-Forum. You can send your comments there if you want.

If you want to contact the author of AKFQuiz personally, have a look at the address at the bottom of this page.

If you find a bug in AKFQuiz, then you should have a look at the Bug-Tracker. If the bug isn't listed there yet, you should report it please. You also can send bug-reports to the address bug-akfquiz@akfoerster.de.

other websites referring to AKFQuiz:

These are just the ones, which are important to me. There are many other sites. You can find them with a search-engine.

Some people often point me to the text “Why Pascal is Not My Favorite Programming Language” by Brian W. Kernighan. And indeed, his arguments are very convincing. If they were true, it really would be impossible to write something like AKFQuiz... Even linequiz would be hard to write then. In my programs I do mostly all of the things he claims to be impossible in Pascal.

I do not know any of the compilers he mentions. Well, there are good compilers and bad compilers. He obviously picked out bad compilers. Was it, just because the text was written in 1981? I don't think so. The eldest compiler, that I know already existed then, and it had none of the limitations that he mentions.

Then people argue, that Kernighan surely knows, what he is talking about, since he is one of the developers of the language C. Well, is it really so surprising, that someone talks bad about a competitive product?!

I haven't heard any convincing argument against Pascal yet. Some arguments I hear are just a question of taste. It's hard to argue about taste. Sure, Pascal isn't really “In” — I give a damn to that! On the other hand, most arguments claim that it would be impossible to do what I'm actually doing. Sorry, but saying that it is impossible, can't convince me to stop doing it anyway. ☺

When you want to distribute copies of my binary packages on your website or wheresoever, you must also make the source code package available, according to the GPLv3, section 6. It is not enough just to point to this web-site, because I delete old versions whenever I release new ones.

You may freely use the texts from this page, modified or unmodified. This includes the documentation (Manpages), the background image, the screenshot and the images for right or wrong. The buttons may be under the copyright of third parties. The program packages and the quiz-files have their own licenses.